Over the last number of years, I’ve been had the honour of visiting various sites around the world with significance in World Wars I and II. Today is a week until November 11th, Remembrance or Armistice Day. In the lead up, I want to highlight some of those sites and the events that happened there.

To begin, the end of the war in Europe.  Bayeux is a small town in Normandy.  All the streets are stone and very narrow.  In fact, this is what saved the medieval town from destruction during the war: the tanks could not fit through the streets and so the liberating armies went around it.  Bayeux is perhaps the closest town to the D-Day beaches in Normandy, and the first town the armies would have encountered after leaving the beaches (it is also the town William the Conqueror left from on his conquest of England in 1066).  It was the base for my explorations of Normandy two years ago (original post here).

Bayeux is a small town but is home to a mammoth cathedral.  My aunt’s father was a medical officer with the Canadian Army in 1944 and came through here.  Strangely enough, when I was showing some of my photos to my aunt, she found one nearly identical of the cathedral that her father had taken 60 years earlier.

Inside the cathedral are memorials to the members of the various armies who liberated Bayeux.

Arromanches Beach was first taken by the British and then used as a supply base.  Some of the floats used to create a breakwater around the beach can still be seen.

Juno Beach, where the Canadian Army landed.  On the 50th anniversary of D-Day, some good friends from Ontario (my “adopted” grandparents) came back with a group of veterans to visit this beach.  They brought me home a rock.  Cheesy as it sounds, when I visited Juno beach in 2006, the 62nd anniversary and 12 years after my friends did, I picked up another.  Its hard to imagine scores of boats and tanks once lined the beach here.  Perhaps some are still visible, but the tide was up.  All that remains are a few battered bunkers that presumably the German army returned fire from.

The Canadian cemetery in Normandy.  It is in the middle of farmer’s fields and can see the ocean.  Its not too big, but big enough considering what it contains.  It is always moving to visit war cemeteries overseas and see the love and care that locals give to maintaining them. 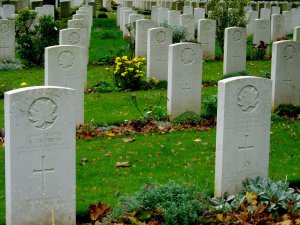