Australia has a special place in my heart.  So it (nearly) gets its own section.  Many people don’t realize that Australia was actually bombed during WWII.  In fact, Darwin was bombed over 60 times and nearly 300 people died.  The major hits went to the wharf, where many boats were destroyed, and the oil reserves which, well, exploded. 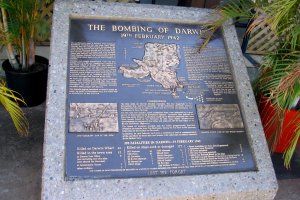 Not only did Darwin suffer huge hits, but Australia was a training ground for many of the Allied troops that served in the South Pacific.  There was (is? Its existence is fairly secretive) a major training camp somewhere in the Northern Territory.  Australian troops were some of the most courageous in the South Pacific, many enduring horrible conditions as POWs under the Japanese.  Many Aussie civilians were instrumental behind-the-lines spies for the Allies in an underground organization called the Coastwatchers.  There is a monument to them in Madang, PNG.
After leaving Japan on the way home on Offshore, we ran out of fuel.  Consequently, we stopped in at a small island in the Hawaiian chain that is aptly named: Midway.  Midway is considered by many to be the turning point of the War in the Pacific.  Pretty much, the Japanese got screwed here. 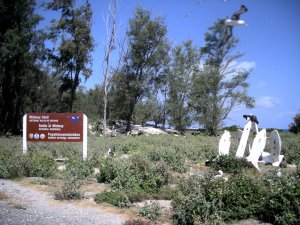 To make a long story short:
Americans crack Japanese code but Japanese don’t know.  Americans learn Japanese planning attack on one of a couple places.  Americans send out phony messages, Japanese fall for bait and presto, Americans know where Japanese are going to hit next.  Japanese don’t know what is waiting for them.
The battle was long, the battle was hard, but in the end, the Americans won and the Japanese suffered huge losses and began to lose the rest of the battle.  They’d essentially tried to pincer the Pacific from the north and from the south and had now lost the north decisively.  You can still see the remnants of the war on Midway whether it be in monuments, in old buildings (like the old airplane hangar that was all shot up during the war), gun mounts, or even the guns themselves.  And there are lots of albatross on the island, 2 million and counting, but they are not from the war. 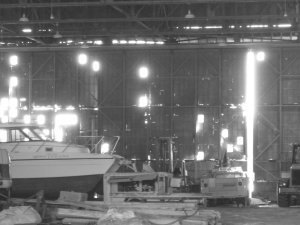 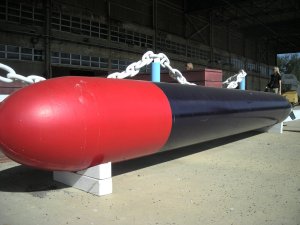 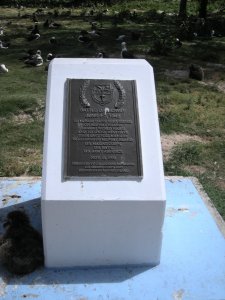 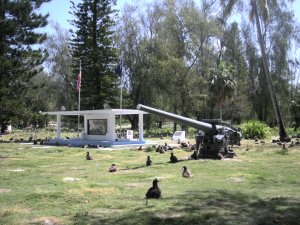 Now, Midway is run by the National Park Service and is a Wildlife Reserve.  There are about 60 people who live on the Island all of whom are either scientists, park employees, or Thai workers.  There are no kids, so they were delighted to see us.  The island is slowly returning to its natural state as the wildlife has free reign and comes first (even at the expense of your golf cart trip across the island or your evening volleyball game).  There is a push to retain some of the war sites like buildings so the past can still be remembered.