Saturday, I went to see Doctor Atomic, the opera by John Adams about Oppenheimer, the man in charge of the Manhatten Project which was responsible for the development of the world’s first atomic bomb.  It was an interesting opera that focussed less on the events (though they were evident) than on the people behind them.  It showed, very well, the internal conflicts many of the main characters experienced while working on the bomb.  At one point, Oppenheimer quotes the Bhagavad Gita: “If the radiance of a thousand suns were to burst at once into the sky, that would be like the splendor of the mighty one.  Now I am become Death, the destroyer of worlds.”

For me, and the friend I went to see it with, it had added meaning because we were in Hiroshima in March (for the original visit blog, see here) and saw first hand the rebuilt city and the memorials that have been set up on the site.  Thousands of people died when the bomb exploded over Hiroshima in August of 1945.  Thousands more died in the days, weeks, and years that followed as a result of various radiation sickness.  Visiting the Peace Memorial was an incredible experience that moved me to tears at a number of points.
This is the A-Bomb Dome.  It was a large, stone, bank-like building only a few hundred metres away from where the bomb exploded.  Surprisingly, parts of the walls were left standing: one of the only buildings in the area.  The building has now been reinforced and is a monument to the destruction of the atomic bomb.  It was the first site we saw getting off of the tram.

This is a model of Hiroshima prior to the bomb blast.  You can see the above building in the bottom left (green roof).  The target of the bomb was the T-shaped bridge at the bottom.  It was deemed to be the best place to kill off transportation in the city as the purpose of the bomb was to be psychological as well as destructive.

The city post-bomb.  The T-bridge is still there because the bomb actually exploded about 600m SE of where they wanted it too and up in the air.  The A-Bomb Dome is still bottom left.  The destruction of the bomb was immediate and ultimate.  There was no living thing left within the inner circle of the bomb. 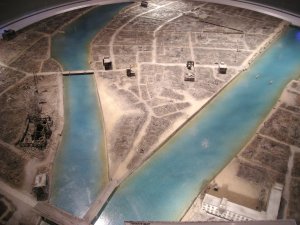 This is a photo of the city post-bomb.  This photo was on the wall in the Peace Museum and took up an entire wall, almost as if one was looking out the window at the sight. 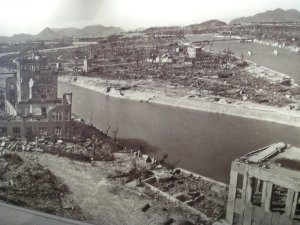 In the models you can see an area between two rivers.  Now, that has been entirely turned over the Peace Memorial Park.  Inside the park, there are dozens of monuments, small and large, to different groups who suffered when the bomb was detonated.  One of them was to a young girl named Sadako. When I was in elementary school, we read a book called Sadako and the Thousand Paper Cranes, the story of a young girl who got leukemia and eventually died as a result.  She hoped that if she could fold a thousand paper cranes her wish to be healed would come true.  She died before that happened.
This is a monument to her.

All over the Peace Park, there are strings upon strings of paper cranes people have folded and left there in memory of her and of the desire for peace.

In another place in the park was this mound.  Inside are the ashes of the people who died and could not be identified.  A large number of children died from the bomb because they were at work that day moving things in the centre of town, where the bomb exploded.

Looking back over the memorial towards the A-Bomb Dome across the river. 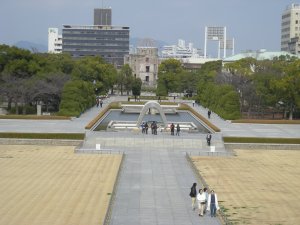 It was inside this room in the Memorial Museum that I was moved to tears.  Inside there were parts of clothing and shoes that had literally melted off of people.  This is a wall.  The streaks are the radioactive materials in the rain dripping down.

Now, the city of Hiroshima is thriving again.  Rather than put the past behind it after rebuilding, it has become a proponent of peace and the danger of nuclear armament.  In fact, every time a nuclear test is done anywhere in the world, the mayor of Hiroshima sends a telegram to the head of that state urging them to reconsider and to stop.  These are all posted over several walls in the museum.  The sad thing is that they still continue: entire rows are dated within months of each other to the same country.