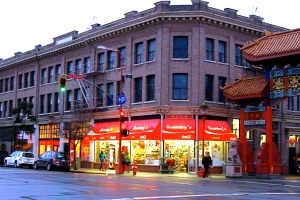 When I returned to Victoria in February 2007 after my first prolonged absence since I initially moved here in 2004, I lived in the growing area known as “The Railyards” in Vic West. At the time, there were only a couple of townhouse/condo buildings there. Now the area has exploded with popularity. There were a number of things I loved about living there; proximity to downtown, views overlooking the Gorge waterway, and being right on the Galloping Goose Regional Trail were just some of the perks. I often did my grocery, or vegetable anyway, shopping just over the bridge in Chinatown.

Then I came back from Offshore and moved out to the “suburbs”. Not quite as far out as I had lived during my undergrad and certainly a more manageable bicycle ride into town (20-25 min), but nevertheless, not downtown. And there I lived from October 2008 until December 2011. It was wonderful, and I thoroughly enjoyed some of the perks of that area. 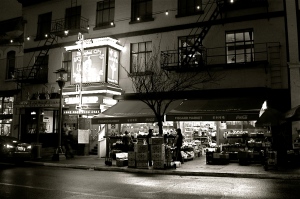 However, now that I am downtown, I am basking in my downtown-ness. The other week, I walked the four short blocks to my friends house and we walked her dog around downtown, coffee in hand. Sunday morning – New Years Day – I rolled out of bed less than half an hour before church began and made it in the door before the opening hymn. My commute to work is less than 10 minutes on the bicycle. But the thing that I enjoyed most today was a quick stroll down to Chinatown to obtain a tea ball for my teapot and do some vegetable shopping at my favorite Chinatown market. 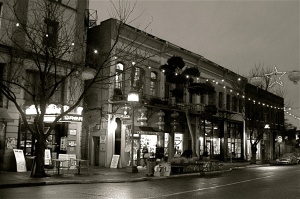 It was doing that thing right on the edge of actually raining. That light sprinkle on already wet streets that gives a certain glow to the city. Add to the rain that twilight time of night when the lights are already glowing as well as Christmas lights still up all over the city, and you have a lovely evening of walking around and looking at glowing, reflecting lights twinkling all around. I began taking pictures just before entering the market, and by the time I left, not fifteen minutes later, the sun was well and truly down and darkness had descended on Chinatown. However the lights lit up the area like beacons in the darkness.

One thought on “Chinatown”