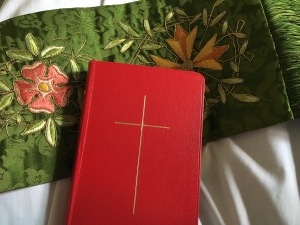 A couple of weeks ago, I presided at my first Book of Common Prayer Eucharist. Its a lovely service and, like many across the Anglican Church of Canada, our is attended by a small but faithful group of people at 8 o’clock in the morning.

In preparing for this service, there were a few “extra” details that were really important for me to have alongside that morning. The red prayer book I used belonged to my mother. In it are small handwritten notes, instructions she had no doubt penciled in to assist her in serving at the table in the parish where I grew up. I continue to use this BCP for myself, though it is a little small to consistently use for presiding at services!

The green stole I wore for the service was an ordination gift last year. It was given to me by the wife of a retired, and now sadly deceased, priest; a couple I got to know when attending the Cathedral in Victoria. The stole is a stunning piece of embroidery, but its meaning goes deeper than its beauty. The stole belonged to Archdeacon Bob MacRae, former rector of the parish I now serve and the first secretary of the Primate’s World Relief and Development Fund, where I currently volunteer as a board member. Bob, and his wife Sue, have both been supporters of me pursuing ordained ministry and it is an honour to wear his stole.

These two items used are a reminder of two faithful people, now passed, as well as reminder of the long tradition I have been called to participate in. For me they are symbols of the timelessness of faith alongside the call to make old things new as we seek to serve God in a generation. They ground me in my past and propel me towards the future.

One thought on “Old Made New”