Three years ago I was back to school for a new degree. I was meeting new friends for the very first time and getting settled in a new city in a province I hadn’t lived in for nearly 20 years. And now I’ve been seeing pictures from friends gathered around in fellowship together and it feels strange not being there.

Instead, I’m across the country sitting in the office I’ve been sitting in since June. At work.

Three years ago, I was not thrilled to leave Victoria to return to Ontario. Yes, I was anticipating seminary and all that might bring, and I was looking forward to living closer to family members I’d never lived closer to than a 4-6 hour drive. But I didn’t really want to leave the life I’d made on the Island.

And now I’m back in Victoria. It is a completely different life than I left and than I thought I would come home to. I find myself missing London! (I’ll change my tune when winter hits.) I miss the family there. I miss the friends at school. I miss some of the places.

It really hit home a week an a half ago when one of my former coworkers in London suddenly and unexpectedly died. Friends gathered at the home of another coworker to tell stories and I felt pretty isolated on the other coast. Yet amidst that, I had some amazing conversations with former coworkers that I hadn’t spoken with since we moved.

And in the middle of it all, all things are being made new. We have a new home in a new city with new jobs doing new things that we hadn’t imagined three years ago. We’re making new memories together and exploring new places. And that is pretty great. 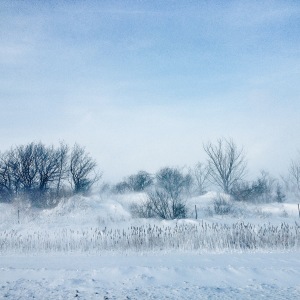 This is why living in southwestern Ontario is a little bit crazy in the winter.

The snow was blowing wildly across the road, creating drifts well into the roadside lane and blinding us from time to time. Probably not the best day to be on the road, but great for taking pictures. (We made it to our destination safely!)

This was February. Here is to hoping that March will be a little nicer to me than February was on the cold and snow department!

One year ago this weekend I finalized the pack-up of my life in Victoria and got on a ferry for a few days in Vancouver, before flying to Ontario to start a whole new chapter.

A whole new chapter? Yes, I suppose it was, though the chapter has been just one in a journey of many that started with the first conversation I had, out loud, pondering a call to ordained ministry as a priest.

The last year has had lots of new adventures. I’ve been exploring a new city and region and re-exploring the province of my birth. I’ve been within spitting distance of extended family members who I haven’t lived near in 20 years.

I have started the seminary journey, completing first year (with top grades in the class!) and have begun to lay the foundations for my field placement for this upcoming year. Lots of new friends have joined me on this journey, some who I know I will have for the rest of my life.

I had the opportunity to travel to El Salvador, participating as an international elections observer and witnessing the human rights and development work done by PWRDF partner the Cristosal Foundation.

And there are more adventures to come! Later this month I will be experiencing the Stratford Festival for the first time! Then, I head to Turkey with a group from the Anglican Diocese of Ottawa. I continue to work with the theological society to plan orientation for this upcoming year of school. Second year classes begin in a little over a month (eeek!) and I’ll be starting my field placement at a local Anglican church.

Southwestern Ontario is a far cry from Vancouver Island,  but it is beautiful country with wonderful people, and more things to learn and places to explore.

Here is to year two in Ontario! 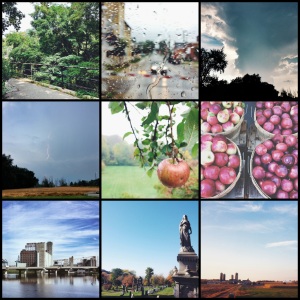 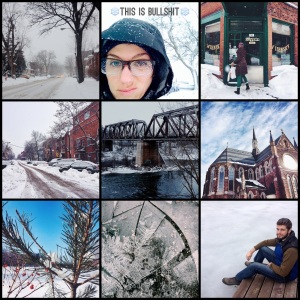 I enjoy a good thunderstorm. When I was a kid, I would sit on Dad’s lap on the large wrap-around front porch of our home in southeastern Ontario. We would listen to the thunder and smell the rain as it pounded down around us.

Thunderstorm over the Trans-Kalahari Highway, 2012

Ten years on Vancouver Island meant ten years with thunderstorms being few and far between. A thunderstorm is an event there: one crack of thunder or one lightning flash sees all taking to twitter: “was that thunder?” or “did anyone else see that lightning in downtown #yyj?” It just doesn’t happen very often at all. For a city surrounded by water, thats not a bad thing. I would not want to be on a sailboat with a tall mast in the middle of a thunder storm.

One memorable night in the Solomon Islands, the Pacific Grace was surrounded by lightning. We had to turn off all of our electronic equipment to ensure it wasn’t destroyed if we were struck. (See Offshore Documentary, part 2, starting about the 2:30 minute mark for the footage.) It was a little unsettling to be in the midst of it, but also an amazing reminder of the power of nature.

Driving into a storm, southwestern Ontario, 2014

We’ve had a lot of storms in southwestern Ontario over the last week. Sunday, after church (and after the Dutch beat the Mexicans in World Cup action), Matthew and I drove up to Lake Huron. We were hoping for some beach time and, since we’re about equal distance between Lake Erie and Lake Huron, we can pick and choose where we want to explore each time! This time it was Huron’s turn. It was a beautiful blue day when we set out. Soon, we noticed an ominous cloud towards the Lake. Then, the wind began to pick up. Next, I saw several bolts of lightning streaking down towards the ground (Matthew was being a safe driver and watching the road so he missed them). Pretty soon we were in the middle of the storm. The rain was coming down so hard that we nearly pulled over to wait for better visibility.

Then, just like that, the rain stopped, the sky cleared, and we were at the beach to enjoy the rest of the afternoon.

Yesterday was another one of those days. I was nearly caught in three torrential downpours whilst cycling around town. After missing the first, a London Hydro employee encouraged me to buy a lottery ticket…I guess that first deluge was a big one! It intrigues me how localized the weather systems are in London. While I could see that there was a magnificently dark cloud over part of the city yesterday, I couldn’t tell that it was raining elsewhere. While I smelt the rain when I got to a different part of the city, and witnessed the second downpour from the safety of my favourite coffee shop in town, I have no idea if it rained a third time in a different part of the city. One neighbourhood: bone dry. Six blocks away: rivers in the street from the rainfall.

One thing is for certain: thunderstorms are fun to listen to, but I’m glad I haven’t been caught outside in one yet!